The St. Andrew’s church was set up by the Portuguese but was rebuilt in 1584 by Vicar Fr Jacoma Fenicio. Among his parish he was known as Arthunkal Veluthacham or the ‘fair-skinned father’. He was attributed with magical healing powers. After he passed away in 1632 the church was rebuilt facing the Arabian Sea and its long white sandy beach. Once it was constructed a statue of St Sebastian was installed. 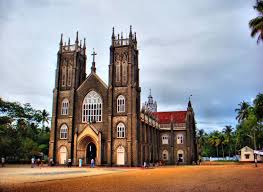 The statue was sculptured in Milan and showed St Sebastian with arrows stuck all over his body from each of the wounds blood was depicted as oozing out. This statue occupies pride of place at the altar. It was a great relief for the Jesuit order of missionaries who had been requesting for setting up a church at Allapuzha since 1560 AD. The Muthedath King finally acceded to their request in 1581. The Jesuits constructed their church with wood and coconut palm leaves. The king donated trees for this purpose. To mark the feast day of St Andrew in 1583 about 500 St Thomas Christians had been baptized. They came to be called ‘Anjootikkar’ or the ‘Five hundred people’. While the church has been consecrated as the St Andrew’s Basilica it has St. Sebastian as the reigning deity.

Later in 1584 the St. Andrew’s Church was converted into a solid building made of stone and lime. In 1640 the miraculous statue of St Sebastian was installed. However, at the end of the eighteenth century the church was taken over by the Carmlite order. The present Vicar Forane is Reverend Father Pius Arratukulam assisted by his team of senior priests.

There is the belief shared by most pilgrims to the region that Lord Ayyapa and St Sebastian were brothers virtually. It is grounded in the practice of all pilgrims returning from Sabarimala having a tendency to take off the chains they wear at the St Andrew’s Church. This is a most amazing feature, as it heightens greatly the bonding between the people and encourages the secular nature of the pilgrims and tourists as well as the population inhabiting the region.

The ‘Nercha’ or crawling on bended knees is the main offering at the St Andrew’s Church. The manner of making the offering is also quite unique. The devotees roll over and over in the hot white sands of the beach. They cover almost the entire distance of one kilometer in this manner. The other forms of offering in the St Andrew’s Church are usually in the form of service. They carry out this service by cleaning the church carrying a brick or two on the head and circumambulating clockwise around the church to offer penance for sins done and even dedicating themselves to the saint under the blessings and prayers of a priest. This self offering is called ‘Samarpan’. Many a time the ‘nercha’ is done ceremoniously before caparisoned elephants. This is accompanied by martial dance performances called ‘Vellakali' or ‘Parichakali’ to the resounding and reverberating beat of the drum called ‘Chendamelam’.

How to Reach St Andrew’s Church

It is easy to reach the St Andrew’s Church by air, by train and by road. By air the international airport at Cochin is the nearest. A taxi from the airport to Cochin city would take about five hundred rupees. From there the journey to Alleppey is just about ten kilometers.

By train the nearest railway station that links to the St Andrew’s Church is the Alappuzha railway terminus. Most trains connect at this railway station from all over the country.

By road there is a great state and private bus service that connects Alappuzha the major cities like Coimbatore, Mysore, Kozhikode, Thiruvananthapuram and Puram and Cochin. The journey from Cochin costs just about thirty-three rupees while Coimbdore costs about two hundred rupees.