Located in the very heartland of Kerala, Revi Karunakaran Museum in Alappuzha houses a very special and eminent collection that is the envy of the world.

Revi Karunakaran was a true connoisseur of the arts. He had a passion for his chosen field of work in the coir industry and yet he could also find time to channelize his creative energies into the picking up of rare pieces of art from all over the world and surround himself with their exquisite beauty and art value. 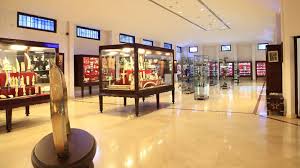 The Rare Collection and Artifacts

Grandson and son of eminent industrialists, Revi Karunakaran studied in the United Kingdom, the United States of America and Switzerland. He was an avid polyglot and spoke with fluency in many of the world’s languages like English, French, Spanish, German and Italian besides his native Malayalam and other Indian languages. After having attained just twenty years of age he lost his father and was constrained to take up the reigns of the vast family empire. He was so deeply occupied with his work that the Government of India honored him with the Life Time Achievement Award in 2001.

During his travels all over the world he developed his hobby of collecting invaluable artifacts which he brought home. He was also a patron of the local artisans and to encourage them he collected some exclusive representations of their workmanship from all over the country. The collections were comprised of crystal ware, carved ivory craft, Tanjore painting and several rare and incomparably fabulous pieces of unique and amazing human talent.
The Museum was set up after the passing on of the great collector himself. In 2006, his wife, Betty and daughter, both donated some part of his precious collection towards setting up of the museum to share it with the world. Today this fabulous collection is housed in the ten thousand square foot of exhibition space delimited for it in the vast Greeko-Roman building that is a mere three kilometers from Alleppey town on the National Highway number forty seven.

Among some of the rarest pieces that form the collection are a two hundred square foot mural that has captured the socio-cultural ethos of the country. Made exclusively with vegetable dyes the mural took more than four thousand man hours to complete it. There is a 1945 model Buick in the Classic category in steel grey tone that adorns the pride of place in the collection. It had been personally owned and driven by the family.

In the Museum there is also an entire wall painted over with flags of one hundred and forty five countries. The vast collection also houses fifty rare Tanjore paintings besides almost four thousand pieces including silver parrots in Mexico, smooth lacquer coated jewellery boxes and puzzle boxes from China and a multitude of ivory carvings and delicate figurines of swarovsky crystal. A major attraction among the crystal display pieces is the splendid falcon fashioned from about forty five thousand tiny motifs and slivers of Swarovsky crystal. The courtyard is dotted with innumerable sculptures. The most impressive among these is the statue of the Prodigal Son made by Sam Phillipe of Israel. The statue is seven foot high.

The ivory collection of the Revi Karunakaran Memorial Museum is legendary as it is most probably the most impressive and largest collections in the country.

Timings: The visiting hours to the museum are from nine in the morning to two in the afternoon. The museum is open on all the days except Mondays as well as national holidays.

The nearest airport is the international airport of Kochi which is situated at a distance of about seventy five kilometers which is easily covered by road in about one and a half hours. The nearest railway station is the Alappuzha railway terminus. From there it is merely a distance of about three kilometers.
By road there is an excellent roads network from any of the nearby towns to Alappuzha. There are a number of State run busses that ply from to and from Alappuzha. Private busses as well as taxis are also available along with autorikshaws at the railway and bus stations.