The village Punnapra is famous for its tremendous harvest of rice as well as the several educational institutions set up in the village. It is virtually the maximum producer of rice in the region. 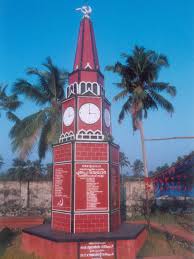 The village of Punnapra has immortalized it name for posterity in the annals of Indian history because of its selfless questioning of suppressive authority. It is renowned as among the first few places in the country to raise the issues of labour during the pre-Independence period. The workers of Punnapra were the first ones to rise up against the oppressive subjugation of the people by the government of the day. One of the landlords called Allpon Aroj had sought police protection but despite that there was a massive uprising. There was a clash of interests.

The violent protest claimed the lives of four policeman and about forty protesters. This aggravated the situation even further resulting in the killing of innocent people. The government let loose the army on the people. More than three hundred were declared dead before the massacre could be brought to a halt. This historic episode has been immortalized as the Punnapra-Vayalar uprising.

The memorial set up is in the form of a large martyr’s column. An annual feature of the commemoration of this historical episode is the procession held from Valya Chudukad at Alappuzha to the Punnapra-Vayalar uprising’s memorial column at Punnapra. This erstwhile princely state of Travancore was among the first to make a bid for Independence and succeeded in establishing a marked respect for themselves in a dynamic emerging world order.

By train there are connections from several of the leading cities of the South with Punnapra, railway station Most trains reach Alappuzha which is just three and a half kilometers away from Punnapra.

By road the village is well connected with other cities nearby. Pannapra lies on the national Highway number forty seven connecting Alappuzha to Punnapra which lies of just about five kilometers away.