The literal meaning of Pathiramanal is the ‘Sands of Night’. This island can be reached from Kumarakom in about forty minutes and from Alappuzha in about an hour. Pathiramanal is situated within the Vembanad Lake which forms the backwaters of the southern Kerala region. The area around Alappuzha in inundated with several lagoon, lakes and fresh water rivers and streams laid out in criss cross patterns on the surface. 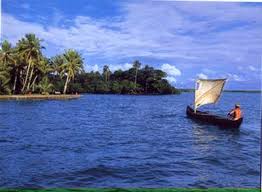 The total area of Pathiramanal Island is around twenty eight and a half hectares. Its length in the South westerly and North easterly direction is around five hundred and fifty meters while its maximum width attained from the South easterly to the North westerly direction is about four hundred and fifty meters. The entire perimeter of the island stretches to about eighteen hundred meters.

Another name for the Pathiramanal Island is Anantha Padmanathan Thoppu and had been bought by ACA Amthraper who owned it till the late 1970s. However, with the establishment of the Land Reforms Act the island came under the ownership of the government. The island then gradually shifted to the jurisdiction of the Tourism Department. The island continues to be uninhabited since the eighties of the past century. The island and its surroundings are nevertheless, home to a multitude of birds both domestic and migratory.

The backwaters of the region have been declared as a worldwide ecological niche for the preservation and conservation of nature at its best as well as the environment. It is approachable by the Muhamma water route while the Muhamma Panchayat nearby looks after the arrangements for the hiring of boats and services to visitors and tourists alike.

The island of Pathiramanal entails a journey over water from either Alappuzha or Kumarakom. From the former it lies at a distance of thirteen kilometers and from the latter it is a mere four kilometers across the Muhamma water route.

By rail this is destination is connected to Alappuzha which in turn is connected with most of the major towns of southern India and the rest of the country by railway routes.

By road the nearest approach to the island is across the mainland of Alappuzha which is located in a close network with other major cities of the South. The National Highway number forty seven goes upto Alappuzha. Also the roadways networking has state-owned and private bus, services plying all the way to this beautiful locale. Then there is also the option of private taxis and autorickshaws.

By waterways, the unique location of the Pathiramanal Island has the absolute distinction of being accessible easily by waterways Kumarakorn is at a distance of just four kilometers from the island. Even from Alappuzha the island can be reached over water by crossing a distance of merely thirteen kilometers.