The Mannarasala Sree Nagaraja Temple is among the foremost temples of India. It holds a unique position in the world of devotees. It has been attributed with mystical, magical powers. It is one of the most renowned of Nagaraja or serpent god temples in the world. The temple is located in the Alappuzha district of Kerala. 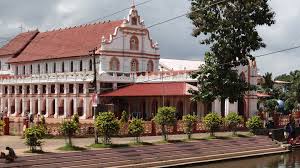 There is a most interesting legend about the temples’ origins and perpetuation. It is believed that Lord Parashurama, who had stayed several kshatriyas, wanted to atone for his sins. He sought the advice of the holy Rishis. They advised Lord Parashurama to gift some land to the Brahmins. As he had no land of his own he decided to propitiate Lord Varuna or God of the atmosphere. He even threw the axe or ‘parsa’, which he had been given to him by Lord Shiva himself, into the sea. With this some land rose up from the sea which Parasrama gifted to the Brahmins. It is said that this land is what is presently called Kerala. However, when the land emerged it was totally saline and of no use neither for habitation nor for agricultural perpetuation.

Lord Parashurama was most chagrined at this situation, however, he sought the advise and blessings of Lord Shiva. He was advised to propitiate the serpent God, Nagaraja, to bring forth his Nagas so that they could scald the land with their purifying venom. The great sage set up a ‘Tirthshala’ or a place of pilgrimage where he set up his headquarters for a few months. Nagaraja, the snake king was pleased and appeared before him in a resplendent form which was bejewelled, beautiful and energetic. His splendid form has been commemorated in the form of a poem by the eminent poet Mannarashala MG Narayana Namboodiri.

The serpent lord granted the sages request and summoned all his ferocious serpents to spread their Kalakuda poison over the land. The flaming venom desalinated the entire area and made it suitable for becoming the verdant haven it has become today. Lord Parashuram prayed to the Serpent King to bless the land with eternal prosperity and also his eternal presence. The serpent God agreed and, thus, the ancient temple was consecrated.

Another part of the legend is that some years after the land had become abundant and green, the couple who looked after it realized that they were doomed to be childless. They were greatly sorrowful and turned to the Nagaraja to bless them with children. However, just when the couple, Vasudeva and Sreedevi, were beginning to accept their fate, a blazing fire broke out in the forest. All the snakes dwelling freely in the forest were scalded and suffered severe burns in the fire. They sought succor in burrows and pits but their burns made them miserable.

The couple were moved by the plight of the snakes and focused on helping them. They prepared and administered all kinds of soothing therapies like fanning the poor charred bodies of the snakes with fans of sweet scented grass, applying sandalwood paste and placing them, under the ‘deodar’ trees. They continued anointing their bodies with Nivedyam like ghee, milk, payasam having molasses, rice powder areca net flowers, cows milk, curd, fragrant flowers and water besides incense, coconut juice, kadali fruit and turmeric powder. The kindly couple constantly chanted vedic mantras and undertook all forms of penances and propitiation to help the snakes to be restored to their fullest health.

Seeing the sheer devotedness of the couple, Vasudeva and Sreedevi, the Nagaraja was most pleased. He blessed the couple with the boon of progeny and took human form himself to be form as son unto them and promised that he would set up his eternal abode in the thick forest of the Mandara trees which he called his Manarasala. This place in reality is the coolest, most soothing place in the land. True to his word the couple had two sons. One of them was a five-head, serpent-headed human being. When it came time for the youth to marry, the Serpent King blessed his brother and went to live in the cellar where he took Samadhi. Devotees believe that he continues to live in eternal meditation. Till date he is revered and fondly referred to as ‘Muthasan’ or ‘Appopan’ literally connoting ‘grandfather’ or the ‘venerated one’.

It is because of this legend that the Manarasala Sree Nagaraja Temple has been known to be the miraculous site that grants the boon of fertility and none has been disappointed. It is said that when the women have given birth to a child they return to the temple and offer elaborate services and ceremonies besides offering snake images mostly in silver which are placed all over the temple precincts and grounds.

And another miraculous aspect is the special turmeric paste that is believed to have amazingly curative powers that can heal skin problems as well as soothe burns.

Festivals at the Temple 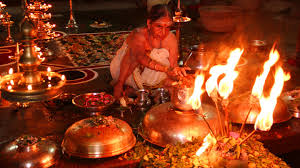 The temple has a unique place among the devout Hindu as well as other devotees. The annual festival is called the Mannarasala Aayilam or the Temple Festival and is held in the months of September and October idols placed in the groves as well as the temple precincts are carried in procession to the residence of the family connected since ages with the temple. They are called the ‘ilam’. Offerings of rice flour and milk like ‘Nurum Palum’ along with a red fluid made of turmeric and lime or ‘Kuruthi’ are made to the deities. The procession is led by the oldest lady of the house who carries the Nagaraja’s idol on her head. The procession moves along slowly amidst great rejoicing. The entire festival is celebrated with great pomp and gaiety.

There are some very specific offerings made at the temple to seek the favours of the Nagaraja. Some of these are molten ghee for long life, turmeric for protection from poisons of all sorts, salt for recovering ones full health; silk grains and ornaments for obtaining education, prosperity and fame; a pot of gold filled with various things or a clay pot filled with gold coins and ornaments for obtaining wealth and prosperity; pepper, green peas and mustard for treatment of diseases; serpent cave made of gold, images of serpent eggs, tree etc for protection from damage; milk, ripe Kadalai fruit as well as nilavara payasam for obtaining whatever one’s heart desires. The greatest offerings like taking a special vessel called a Uruli made of brass or bronze for performing the ‘Nurum Palum’ to obtain the boon of having a child.

The Nagaraja Temple can be approached by air, by rail and by road.

By Road the temple is well served by the local bus service. The state-owned bus service runs from the nearest bus stand at Haripad which is just three kilometers from the temple.