The Krishnapuram Palace in Alappuzha

The Krishnapuram Palace is one of the finest architectural structures that can be seen in Kerala. Situated at Kayamkulam this palace was constructed by the then Travancore king Anizham Thirunal Marthanda Varma (1729–1758 AD). This museum houses a huge mural painting known as Gajendra Moksham and has many interesting exhibits on display. Renovation for this palace was undertaken by the Archeological Department and currently it is the protected monument of the Archeological Department of Kerala. 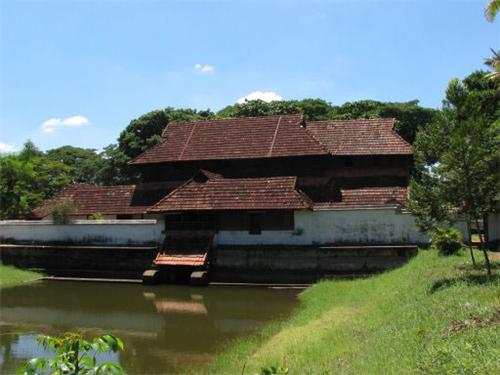 History of The Krishnapuram Palace in Alappuzha

After the 1746 battle, the Travancore King seized Kayyakulam and it was brought under administration of Travancore state. In the beginning a single story palace known as Ettukettu, was built by pulling down an earlier constructed palace by Raja of Kayamkulam Veera Ravi Varma. Near the palace there was also a pond, temple and a urappura. The architectural style of the building is overwhelming and has numerous buildings within the palace complex.

Architecture of The Krishnapuram Palace in Alappuzha

The Krishnapuram Palace looks unique with its Kerala as well as western-style architecture. The beautiful courtyard, gabled roofs, thick framed doors, narrow corridors and dormer windows are some of interesting highlights of this palace. This sprawling mansion lies on a 56 acre property and has been built as per Vastu Shastra custom. The palace has 16 enclosures which include 22 rooms and four open courtyards. It looks more or less like a quadrangular structure that opens up into open courtyards which popularly known as nadumuttam. It was constructed with laterite stones and wood work consisted of teak, rosewood and Angili. The slanting tilted roofs, projecting balcony and sliding staircases add to the elegance of its architecture. Sufficient windows and ventilators have also been provided to allow proper air flow and lighting. Underneath the palace lies a water source which offered cooling effect and helped maintain a normal temperature within the interiors.

The Krishnapuram Palace has been converted into a museum that houses sculptures, antiques and coins. The major highlight is the Gajendra Moksham mural painting which is approximately 49 square metre and is considered to be the largest painting in India. The picture shows Lord Vishnu being saluted by an elephant while all other Gods and Saints watch on. This mural has been placed at the entrance of this palace with the idea that the rajas could pray the diety after their bath.

Another attraction in this museum is the Buddha mandapam hall which has on display four Buddha statues. It was found in the pond known as Puthenkula located in Karunagappalli. These idols depict the strong presence of Buddhism in Kerala and they were tossed into the ponds during anti Buddhist campaign.

The Kayamkulam sword used by the Kings during the 18th century has also been exhibited here. The other artifacts put up here include a Bible having inscriptions in Sanskrit, traditional oil lamps, stone figures engraved with serpent goddess.

The museum is open on all days except Monday as well holidays.Timings are from 9:00am to 5:00pm.