The Chavara Bhavan Shrine in Alappuzha is a beautifully isolated place that is a must-visit for anyone who seeks some peace of mind and time for reflection. Its scenic seclusion in the small village of Kainakary in Alappuzha guarantees a unique and therapeutic experience. The fact that the Kainakary village is surrounded by water on all sides necessitates a picturesque boat ride through the Backwaters to reach the shrine, and is perhaps one of the best parts of a visit to the Bhavan. 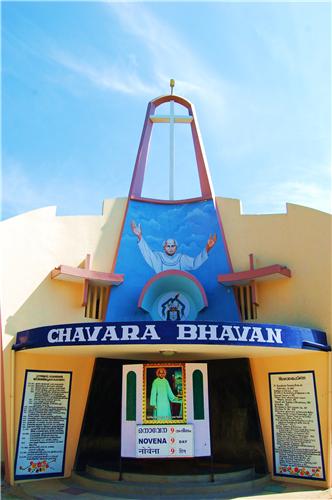 Chavara Bhavan is an ancestral abode of Kuriakose Elias Chavara, who is the world-famous co-founder and first Prior General of the first congregation for men in the Syro-Malabar Catholic Church, now known as the Carmelites of Mary Immaculate, and also of the Sisters of the Mother of Carmel.

Today, the ancient Chavan Bhavan, is a revered Holy Shrine for devotees who visit it to offer their prayers and seek fulfillment of their wishes. There is room for meditation, adhyayana (concentration), and bhajana in the chapel.

Schedule for Mass and Novena

The birth anniversary of Saint Chavan is celebrated with much enthusiasm every year on the second Saturday and Sunday of February. Mass and Novena are held regularly in the Shrine and are well-attended for devotees seeking a spiritual experience.

The best known attraction at the Chavara Shrine is a beacon of light that is preserved here. This Beacon is as old as 250 years, and commendably, it is found in the shrine in its most exact and primitive state.

The ancient home of of Kuriakose Elias Chavara is preserved in its original state, and it forms the main highlight of the well-maintained shrine. In actuality, the house is only a small, but precious, hut. Its simple roof made of thatched coconut foliage and a humble special arrangement is a proof of the fact that the saint believed in a simplistic lifestyle. There are narrow doorways and walls made of cement and teak in the hut.

Inside this birthplace of the Catholic legend, a giant, true-to-life cut-out of him has been installed, in which he is shown extending a hand to give blessings, with the Holy Bible facing him. Villagers are often found spending moments of solitude and soul-searching here, even though praying rituals in the old hut have been discontinued. To cater to this purpose, however, the Bhavan has a dedicated praying area.

Another interesting artefact found here is an ancient armchair and a confessional made out of wood, which was used by Kuriakose Elias Chavara himself. Even after having a legacy of over a hundred and seventy five years, these objects have an appearance which is good as new. Such a careful maintenance of historical evidences is indeed worth appreciation.

The Chavara Bhavan Chapel also houses an Information Centre, a prayer area and well-maintained rest rooms. For South Indian Catholics, a visit to Chavara Bhavan is like going to Haj. A number of English visitors also throng the Holy abode of Pastor Chavara, and very often, choose to reside in the famous House Boats of Alappuzha.

Last but not the least, the mesmerizing experience of the boat ride in the backwaters of Alappuzha is an attraction that trumps all others!

How to Reach Chavara Bhavan Shrine

Kainakary is a village in Kuttanad Taluk in Allappuzha District of Kerala state.

By Road
Taxis: Local taxis are available for hire at reasonable rates. There are many Car rental companies offering cars with or without drivers. Rates revolve around Rs 7 per km, minus taxes.

By Rail
Alappuzha is an important railway station that is connected to every important city in India, and is hence easily accessible throughout the country. There are direct trains to Thiruvananthapuram and Ernakulam and also to further North from this station.

Taxis and autorickshaws can be hailed from the Railway Station to the Chavara Bhavan.

Air
The closest International Airport is at Cochin. A cab or taxi can be hired for about Rs.450 from Cochin airport to Cochin city, post which, a bus or train can be taken to Alapuzha.

To reach the shrine, one must travel through the waters surrounding Kainakary.

Ferry Services
Regular ferry services connect most locations on both banks of the backwaters. The Kerala State Water Transport Department operates ferries for passengers as well as tourists. It is the cheapest mode of transport through the backwaters.