Business and Economy of Alappuzha

The ‘Venice of the East’ Alappuzha city is situated in the Alappuzha district of Kerala. The beautiful port city is naturally decorated with a long stretch of coastal line, several fresh water rivers, backwaters canals, lagoons and other numerous water bodies. The city is also the headquarters of the district and, therefore, holds grave importance as a major economic contributor of Kerala. Alappuzha is a popular tourist destination and the business and economy of the city majorly relies upon agriculture, marine products, coconut coir products, and the tourism industry. Kuttanad region is best known for the paddy cultivation for which it is famously referred as the ‘Rice Bowl of Kerala’. 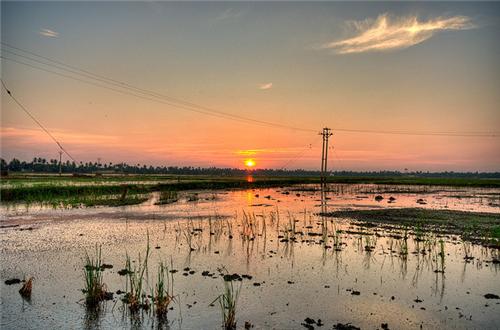 The economy of Alappuzha depends to a great extent on the coir industry for which the region is well-known in the whole country since ages. The plethora of coconut trees in this region has been helpful in flourishing this industry in Alappuzha. The profusion of raw materials makes possible to get the green husk from the coconuts.

And the business has been carried through those canals, backwaters, rivers and the sea. From the Arabs to the European traders, all showed great interests in importing the coir and other coconut products to their own and to other countries. But it was in 1859 an Englishman named M. James Durragh who introduced the modern technology of manufacturing mats and matting. There is Coir Research Institute in Kalavoor and a Coir Training and Designing Centre in the Alappuzha city which was established in 1956. Other than the coir, several other coconut products are manufactured in Alappuzha. These are Coconut Oil, Mats, Copra, Matches, toys and kitchen utensils made of coconut shell etc.

Like any other south Indian region, Alappuzha grows a vast variety of aromatic spices. Cardamom, Cinnamon, Bay Leaves, Pepper, Ginger, Areca nut, Tapioca and many other spices have long been exported from Alappuzha since eon. The spice market still carries high value in terms of economic contributor in Alappuzha.

Tourism is another soaring industry which serves not only Alappuzha but the whole state of Kerala. The enthralling scenic beauty of Alappuzha decorated by plentiful backwaters, lakes, rivers, canals, a long stretch of Arabian sea and lush rows of coconut, palm trees and several other natural traits have made the place one of the most popular and extravagant tourist destination in the global tourism map. Apart from the natural beauty the houseboats on the backwaters and lakes, the authentic Keralite foods and the most relaxing and rejuvenating Ayurvedic Spa and massage are the major attraction for the global tourists.

Alappuzha has seen some potential growth in various business sectors in recent times and, therefore, plays a significant role in maintaining the economic balance in the state of Kerala.