Ambalapuzha Sri Krishna Temple in Alappuzha is one of the significantly old temples of all the ancient temples of the South. In fact this temple was probably built in 790AD under the patronage of the Chembakassery Pooradam Thirunal Devanarayanam Thampuran. Belief has it that this temple is one of the seven greatest of Vaishnavite temples of Travancore. 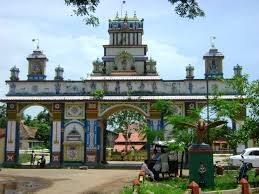 There is a historical story about the temple related to Tipu Sultan. In 1789, Tipu Sultan had brought the idol of the main deity from Guruvayoor temple of Sri Krishna to this particular site.

Another legend has it that Ambalapuzha had been submerged under water. The ruler of the surrounding area was Vilwamangalam Swami. He took a cruise on the vast water body and was mesmerized by the sounds of a flute. The sound was emanating from the trees on the shore. The sovereign quickly turned towards land to search for the source of the choice music. Once on land the King and Swamiyar saw Lord Krishna perched on a tree branch while setting his signature flute to his lips and played on it. He was joined by the King and Swamiyar who sang hymns to the divine music. After the session when the vision of the Lord disappeared the King decided to construct a temple to commemorate the sighting of the Lord.

Another legend associated with the temple is that once the king had constructed the temple Lord Krishna came disguised as a sage and visited the King and asked to play chess with him. The king offered to play for some reward and asked the sage to ask for some gifts. The sage merely asked the king for rice and that two on a specific condition. The condition was that the king would place a single grain of rice on the first box of the chess board and then successively double the number of grains in every successive box.

The king was disappointed at the humble request of the sage. He had wanted to give him all kinds of riches. The king never realized that the wily sage had created a conundrum that would probably take up every grain of rice available in the kingdom. Therefore, when the king realized his inability to fulfill the sages’ demand he was quite shame faced.

Having taught the vital lesson of humility the sage settled for a bowl of the milky sweet porridge which came to be called the famous ‘Amabalapuzha payasam’ down the ages. Ever since then this form of payasam is being offered to the Lord himself and then distributed among the devotees.


How to Reach Sri Krishna Temple

The temple can be reached by air from the international airport at Cochin which lies just about eighty five kilometers from Alappuzha. By train the nearest approach is from the Alappuzha railway station which is at a distance of about fourteen kilometers from the Ambalapuzha temple.

By road there is ample connectivity with the other nearby places. The road route nearest to the temples is from the town which is just about one and a half kilometers from the Sri Krishna Temple. The state owned bus services have a frequent service to the temple from the Alappuzha and Ambalapuzha route. The state capital Thiruvananthapuram is situated about one hundred and twenty kilometers away. Also Ambalapuzha is sixty kilometers from Ernakulam.