The Alappuzha Beach in Alappuzha is one beach that has a mind of its own. At different times of the day, in different seasons, and at various points in history – the beach and its waters behave differently, almost as if they feel the need to be the underrated “unpredictable” – but what remains constant through all its mood swings is, its beauty. 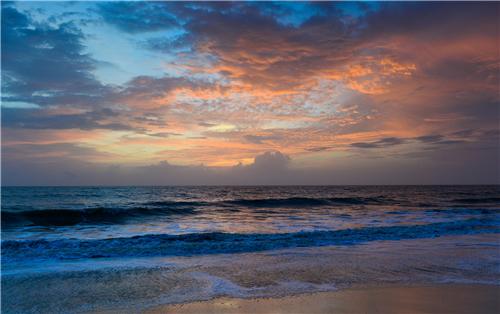 No matter when you go to visit the Alappuzha beach, it’s a promise that it will take your breath away whenever you do.

This exotic beach on the southern coastline of the Arabic Sea is a locale where one can unplug from the chaos and bustle of everyday life and spend a few moments in solitude. Surrounded by the cooling shade of palm trees and gentle, soothing breeze, here is where you can take a flight to your dream world and return with a rejuvenated perspective on life.

Alappuzha beach is known for its vast stretches of pristine white sands that add to its ‘exotic’ quality. Milky sand and clear aqua blue of the waters that reflect the colours of the sun, – the beach is rightly referred to as the Venice of the East by travellers from across the world, making it the perfect getaway for people wishing to wash away their tensions and worries into the surf.

What can be bet on as the main attraction of the beach once you are there is its old pier. Even the pier, like everything else in and around the beach, has a history of its own. The pier is more than 140 years old and date backs to 1862 when it was built to provide protection to the boats and ships that came into the harbours of the beach. It stands in a dilapidated condition at present, but that is perhaps the reason why it forms such a spectacular sight that has reminiscences of the good old days of Alappuzha beach, when it used to be a major Keralite port. Once upon a time, you could walk onto the old sea bridge and enjoy a 360 degree view of the mesmerizing Arabian Sea, standing over the sea itself.

The Alappuzha town and beach speak of a rich historical legacy. Owing to its proximity with the Arabian Sea, Alappuzha has always been an important part of the maritime routine of Kerala. In fact, the famous Alappuzha Light house built by Captain Hugh Crawford in 1862 still looms in the backdrop of the beach, and it takes the visitors back to Kerala’s Colonial past. Besides, it serves as a magnificent structure that adds to the romantic charm of the place.

However, inspite of the beach’s inherent romantic quality, the beach can be enjoyed by people from all age groups thanks to the plethora of entertaining options that surround it. The Vijaya Beach Park is a small park located close to the shore, and it forms a perfect setting for kids to enjoy themselves in nature’s bounty of lush greenery.

But that still isn’t all. Alappuzha beach offers what Kerala is synonymous with – it’s picturesque and serene Backwaters. Just the mention of Backwaters is enough to conjure up fantastic images in the mind of the traveller who’s bound to Kerala – and they’re every bit justified in doing so. From larger-than-life Snake Boats to big and small House-Boats, in the backwaters of the Alappuzha beach, you’ll find it all.

The contemporary boating culture derives from the old tradition of “Kettuvallams” or rice barges of the colonial times. They were originally used to transport bags or rice and the famous Kerala spices from the port of Alappuzha. Presently, however, going for a boat cruise is a pure recreational activity.

Today’s houseboats have all the comforts and facilities to make you want to spend a leisurely lifetime in the gleaming waters of the beach. Moreover, there is nothing like glancing at the setting sun from the balcony of a houseboat, in the middle of the lulling waters of Alappuzha. Whoever experiences this, cannot help but feel enchanted and dazed.

A major highlight of the boat racing culture of the beach is the annual Nehru Trophy Boat Race which began in 1952 on the occasion of the visit of India's first Prime Minister, Jawaharlal Nehru to Alappuzha. Since then, every second Saturday of August is celebrated as the Nehru Trophy Race in which one can see the best snake boats of Kerala, preparing to outdo each – other.

The hospitable beach is also home to a great variety of flora and fauna. Plantations and old colonial buildings dot the shore of the beach.

The picturesque quality of the Alappuzha beach is amply exploited by filmmakers, who find the sweeping view of the beach ideal for shooting romantic sequences.

How to Reach Alappuzha Beach